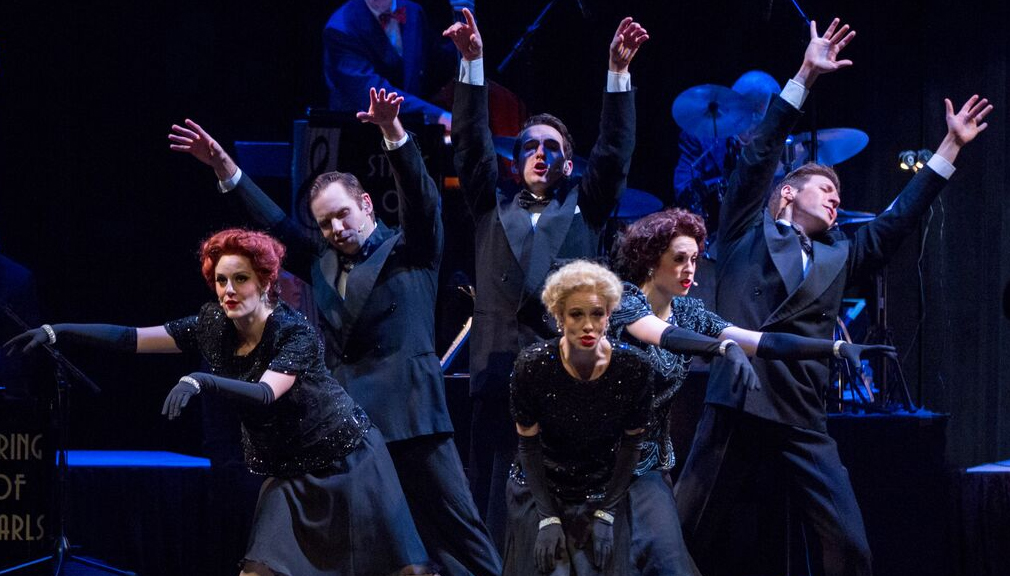 IN THE MOOD celebrates America’s Greatest Generation through the music of Glenn Miller, Tommy Dorsey, Artie Shaw, Benny Goodman, Harry James, Erskine Hawkins, The Andrews Sisters, Frank Sinatra and other idols of the 1940s. IN THE MOOD takes a look at America’s Swing Era, the last time when everyone listened and danced to the same style of music.   It recreates defining moments from the 1930s/1940s – from the happy-go-lucky era before WWII – to the start of the war when thousands of our youth were going abroad to defend our freedoms – and longing for the end of the war when loved ones would be reunited. The famous LIFE MAGAZINE picture “The Kiss” by Alfred Eisenstaedt epitomized such a moment.   The music arrangements of these American songs evoke powerful emotions even in people who were born decades after WWII.

Swing Music inspired America with a vision for the future filled with hope, promise and prosperity. This music moved the Nation’s SPIRIT and helped to sustain the nation’s morale during World War II, arguably the pivotal event of the 20th Century.

Creator and producer Bud Forrest is a Juilliard trained pianist and conductor who served as accompanist for the official U.S. Air Force chorus The Singing Sergeants. He compiled the greatest music from the swing era into a revue about the big band era and the influence of this music before,during and after the WWII years. The second act is experienced as a moving tribute to those who fought in the war and to all veterans – even today’s.

IN THE MOOD captures the feel of the big band era in part because of the involvement of the late Vic Schoen as the show’s primary arranger.  Mr. Schoen created the musical arrangements for the entire career of the legendary Andrews Sisters and was Music Director for both Universal and Paramount Pictures. He was one of the seminal creators of the swing-era sound that he imbued into IN THE MOOD.   We are both pleased and proud to carry on this tradition.

The National Archives in Washington, DC brought IN THE MOOD to their audiences as part of their commemoration of the 50th Anniversary of WWII, and the response was so extraordinary that crowds lined up for hours before curtain time. In 1993, thousands attended an out-of-doors performance on Constitution Avenue and many stayed to dance the night away. As a result, in 1994 and 1995 IN THE MOOD, in affiliation with the USO, began a series of tours that played to audiences across the United States.  In 1997 The band and singers were selected to be part of the entertainment for one of President Bill Clinton 2nd Inauguration Balls.

Now touring for nearly a quarter of a century, IN THE MOOD is a phenomenon among touring shows.  Performances have taken place all across America, Canada, New Zealand, The Netherlands and 4 sold-out tours of Australia. IN THE MOOD is constantly being revamped and updated. While there are a number of permanent Big Band/Swing Era songs in the show, many are rotated out and replaced with selections from the huge body of music from the late 1930s to the mid 1940s.

Stage director and in-demand choreographer, Alex Sanchez, a veteran of 11 Broadway shows, is set to bring the IN THE MOOD Singers and Dancers alive with his staging and choreography. He is committed to bring a fresh, dynamic, ever-changing perspective on the culture of the Swing Era.  IN THE MOOD has returned to many venues, some as many as eight times, and patrons who have seen the show before are never disappointed.

With the music and music arrangements, costumes, choreography, singers, dancers and a live big band, IN THE MOOD is as authentic as it gets.