Click the play button below to listen to a demo recording of IN THE MOOD with a symphony orchestra! 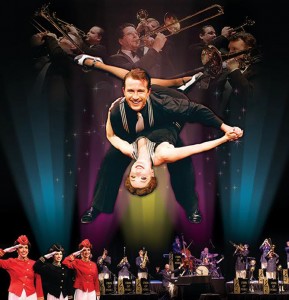 A national and international phenomenon!  For nearly a quarter of a century, IN THE MOOD has taken audiences back in time where there were platform shoes, double breasted jackets, wide-legged pants, the big bands, the singers and the swing dancers.  This is not just another big band – this is THE big band show to experience all the sounds and sights of what it must have been like to experience this great American music – the music that moved the Nation’s Spirit!.

Now, take these 19 performers and combine it with your symphony orchestra and IN THE MOOD will take on another whole dimension.   We are pleased to announce that orchestrations will be done under the supervision of Marion Evans.   Marion arranged/orchestrated songs for some of the most accomplished entertainers, including Tommy Dorsey, Benny Goodman, Count Basie, Judy Garland, Eydie Gormé and Steve Lawrence, Sammy Davis, Jr., Perry Como, Helen O’Connell, Carole King, Tony Bennett and many more. Marion wrote arrangements for 65 gold records and 17 television shows including the closing theme for “The Tonight Show with Johnny Carson; and orchestrated 11 Broadway shows.

And returning for a 5th year, all staging and choreography will be done by Broadway veteran Alex Sanchez.  Alex was a dancer on Broadway in Fosse, Chitty Chitty Bang Bang, A Dancer’s Life with Chita Rivera, Follies, Big: The Musical and A Wonderful Town among others.  He brings his unique style to the swing dancing and staging of IN THE MOOD for an unforgettable performance.

IN THE MOOD has toured to 49 states, four times to Australia for over 100 sold out shows, New Zealand, Canada and Europe.

It is now time to bring this great show to your city with your symphony.

Symphony Magazine Ad IN THE MOOD 2016